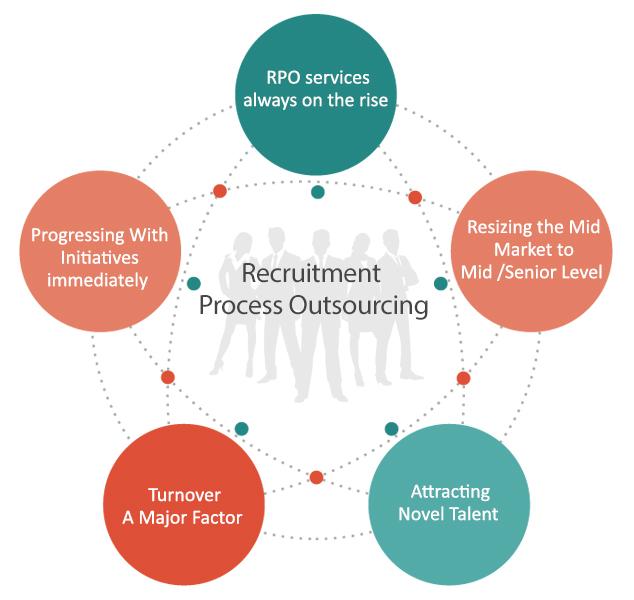 According to some top officials and bureaucrats of the worlds, leading RPO companies it has been confirmed that the Recruitment Process Outsourcing industry is experiencing an all time high in its growth and expansion. Mentioned below are the top five trends that have evolved in the RPO industry over the years and taken this industry by storm providing more than expected to the RPO executives:

RPO services always on the rise

Most companies have noticed a remarkable growth in the revenues. A similar account is heard from the CEO of Novotus who mentioned that the deal flow in particular has risen up tremendously. Its revenues are hitting record highs, clearly indicating the accelerating growth and popularity of the Recruitment Process Outsourcing service industry.

In the same momentum, the President of Accolo added that his company too, has witnessed similar transformations as Novotus and he is glad with the results. Citing an example from his experiences, he recollected that a valentine campaign launched by Accolo in the month of February actually raked in more leads than they could manage to achieve in the last three months.

One of the main reasons for the enhanced deal flow is attributed to the deals coming from smaller organizations. The trend has shifted from millions and multi-millions to multiples of hundreds and thousands such as $500 000 to $800 000 that are hugely responsible for ushering in revenue and propelling the RPO industry into the right direction.

It has also been noticed that not only has the lower tier of the mid market entered into RPO but also brought in allies like engineering, sales and higher executives. According to Accolo, that has been partnering companies with its digital media advertising, points out that, these are working their way out with the search engines of the world and are always in dire need of a large sales force which is where they come into action.

One of the changing trends of this industry is the acceptance of this new type of service by newcomers in the market. These newcomers are also those who have never heard about RPO earlier and after knowing about the way it works have turned out to be its biggest mascots. In addition, to this newcomers are the same ones who were at a given point of time had no faith in this institution to be profitable or worthwhile and now the tables have turned as these very organizations stand in awe of this booming new field of business and are now most passionate about incorporating it.

This is so because the HR departments of these companies are overwhelmed at meeting their hiring requirements with a new and improved approach with sure shot results and enhanced revenue generation.

One of the surveys from Staffing.org and its Technological Development department has found out that in general more than 50% professionals quit their current positions for new ones as soon as there is an improvement or up rise in the market conditions. This explains that job growth is not necessarily same as job creation and reduction in unemployment but alternative job choices according to situations.

According to the Labor Department, the above phenomenon has been coined under the term – Churn or Churning that implies a healthy rate of people voluntarily shifting from one job to another. On an average, there are 2-3 million people in the U.S doing this each year.

With the onset of the Recruitment Process Outsourcing Services, a trend is seen in many companies that have started implementing their initiatives that were once kept on hold. As the initiatives are declared live, there is no turning back and the need for new players brings in RPO services to the forefront.

Overall, it can be concluded that all the above trends are Pro RPO as they have helped the new industry tread the right way and with many major and minor businesses getting on board the RPO to meet their staffing and development needs, it leads to improved economy and careers even in the future to come.